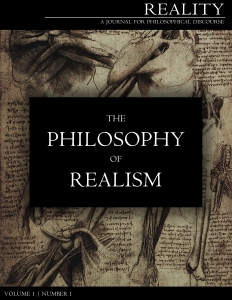 From the Editorial Introduction:

This first issue of Reality—The Philosophy of Realism—like most publications and especially those of a collaborative effort, signifies innumerable hours of effort.  The goal of our journal is simple: to reinvigorate an intelligent discussion about realism as a philosophical approach.  By a realist approach, we mean not simply as pertains to theories of knowledge, but rather a kind of thinking that perfuses itself throughout all philosophical inquiries: all questions of truth, of meaning and purpose, of good, of human action, the political, the physical and the metaphysical, of thought and thing, and anything else about which one might ask, “What does this mean?”  To clarify this pursuit of reality, and expound on its importance, our first issue asks the question: what is realism?  It is an important question, not simply for our purposes here, but for philosophy as a whole, and thus an important question for all human beings.  Without maintenance of a sound answer—which must be sustained dialogically—philosophy wilts into one or another sophistical theory that begins by denying some aspect of the real; and a small error in the beginning becomes great in the end.

To safeguard against such slippery slopes, we take a cue from the first philosopher of the Western tradition, Socrates, and seek to define our terms: “what is reality?”

VOLUME 1, NUMBER 1 – THE PHILOSOPHY OF REALISM

An examination of theoretically-constituted political realism as capable of contributing to the common good.
Response: CLASSICAL REALISM IN A DEMOCRATIC CONTEXT– Brian Jones [PDF].

Article: REALITY AND THE MEANING OF EVIL – Kirk Kanzelberger [PDF]

What does it mean to say that “evil is really only a privation”?  What is the reality thereby specified?  A shift in our understanding is needed.
Response: MADE OF FLAME AND AIR – Michael Dodds, OP [PDF].

An advocation for “semiotic realism” as the means to re-establishing realism as the preeminent philosophical approach.
Response: THE ANALOGY OF RES-ALITY – Matthew Minerd [PDF]

On the sense-perceptive realism of Aristotle and Aquinas, offering a Thomistic-Aristotelian and phenomenological defense of the position contra late medieval and modern nominalism.
Response: THE PHILOSOPHICAL IMPLICATIONS OF SENSE REALISM – James D. Capehart [PDF].

This site uses Akismet to reduce spam. Learn how your comment data is processed.